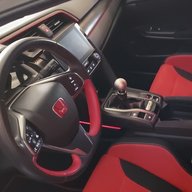 mbaapk said:
why is this thread still going?
Click to expand...

Busted. We were going to stop this thread about ten posts back, but we all agreed to keep it running just to annoy you.
2018 Aegean Blue CTR 2002 Lexus SC430

It should still be a bit taller since the section width is wider. I'm guessing they wanted to keep as much turn-in feel as possible.
Paul

Maybe because they're going for a specific diameter range in mind? Quite possibly because of individuals like yourself who like the smallish sidewall for aesthetic reasons. Going 40 or even 35 profile is going to get complaints from those who are aesthetics based as, "the Championship White Type R with 18's I saw once just looked weird. Maybe it drove better. Maybe it didn't." But with the change they're still getting additional sidewall and keeping most of the aesthetic. It's not rolling 20's like people want to say but that's just a bragging number and has nothing to do with performance for those focused more on that. Again, those serious about pulling performance out of the car will likely be using 18's and I think you already know your response to putting those on it stock.
You must log in or register to reply here.
Share:
Facebook Twitter Reddit Email Link
Top