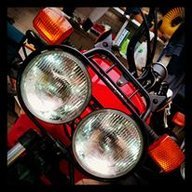 Yeah, there is this classic car channel on Discovery, Vintage Voltage, a UK company transforming classic cars with EV power.
They have a youtube channes as well.

Guess what they are using, Tesla hardware. (Motors and packs)
But not only second hand Tesla stuff, also new less powerfull motors.

And today saw a vid of a owner who wanted to know the battery degradation on his battery...82% after 5 years or so.
Wich was good, and he said, if it was 77% or lower, I would use the battery for my hous and get off the grid.
(He works with batteries and was also tech savy)

Rhorn said:
Good points. I think another important point to note is perspective. Another thing that people do not understand is that EVs and Lithium batteries are still relatively new (I mean as in being mass marketed). When ICE automobiles were being bought en masse in the 1950s the emissions were radically different than now. Also the batteries back then impacted the environment more than lithium, as they contained mercury. Not sure when exactly car batteries transitioned from mercury to lead-acid but in 1996 mercury batteries were outlawed in the US in favor of lead-acid and Nickle batteries which still have a higher environmental impact than lithium. This would explain why there hasn't been any legislation for it yet as lithium is relatively less dangerous than mercury, lead-acid and Nickle as well as being a new technology.

You can expect the same situation with EVs. Lithium ion battery production and capacity has been dramatically rising in the past decade. As what we have discussed there is the possibility of Lithium Air or SSD batteries being used for EVs, so that uncertainty is one additional reason why there has been a lack of investment. However you can expect the recycling to begin to become more efficient when it becomes more mainstream. The fear mongering about lithium batteries doesn't make much sense in this context. Its literally more environmental friendly than lead-acid batteries which is used in ICE cars.
Click to expand...

) this is still early stage when compared to the +100 year ICE cycle we are in.

It took like 10 years or less for carcompanies to make powerfull small capacity low cilinder engines to match and go beyond the big blocks of the '70, '80, '90

When there is a crisis, companies can be very savy and think out of the box.

So we are now finally at a point were an ICE cannot be any more efficient than now.

EV tech will just be the continuation of stretching everything to the max in terms of efficiency and renewability I think, they (companies pushed by governments and all sorts of groups) wont be waiting another 7 decades to make shifts...

That all said, I made a trip to this little cool garage/company

And they also DO it all, rebuilds, body, engine, gearb,ox, paint, restojobs, fixing.

Makes me wanna invest in a ICE car, wich strangely enough in these EV and hybrid times wouldnt be such a bad idea

Riko said:
That all said, I made a trip to this little cool garage/company

And they also DO it all, rebuilds, body, engine, gearb,ox, paint, restojobs, fixing.
Click to expand...

Haha explain?
Billman?
Does it mean what I think you mean?

Riko said:
Haha explain?
Billman?
Does it mean what I think you mean?

Lol, he's on the s2ki.com forums (handle name "Billman250") and he's probably the most knowledgeable and experienced S2000 mechanic in the US, maybe on the planet. He has only worked on S2000s ever since they came out. People drive across the country to have their S2000s serviced by him, and owners around the globe buy his timing chain tensioner mod to replace the lousy original one. Luckily, he is just 15 minutes from me, so he was my go-to S2000 tech.
Last edited: Tuesday at 5:51 PM
Paul

okay @s2kdriver80 , you didnt visit the link huh....didnt even read the link to

Riko said:
okay @s2kdriver80 , you didnt visit the link huh....didnt even read the link to

What are you going on about? I was clarifying who Billman was.
Paul

yeah missread, 'like' the billman of europe, my bad

It's great that Europe has these guys who know what they're doing. I was also fortunate to have access to a good S2000 mechanic near me.
Paul

he also has this big shop with tons of stuff lying around?